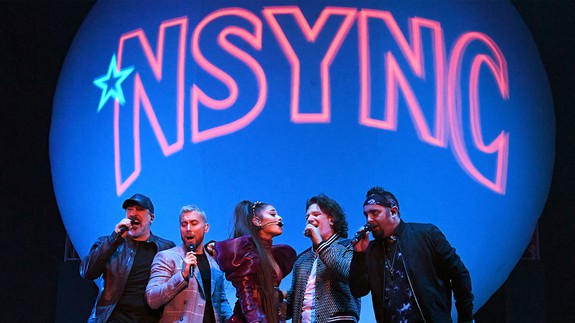 Ariana Grande wowed festival goers — and livestream viewers — with her closing set at Coachella week one. After some major teasing on Twitter, on Sunday night the pop star finally revealed one of her special musical guests: *NYSYNC.

The popular boy band of the late 90s and early aughts joined Grande to sing their hit “Tearin’ Up My Heart.”

“I’ve been rehearsing my whole motherfucking life for this moment,” Ariana says before they all start singing the iconic bop in unison.

Notably, the band’s former frontman Justin Timberlake couldn’t make it, as he is finishing his own tour. But that didn’t stop the rest of the band from living their best life and giving it their all with Miss Grande, who sang Timberlake’s parts in his absence.   Read more…