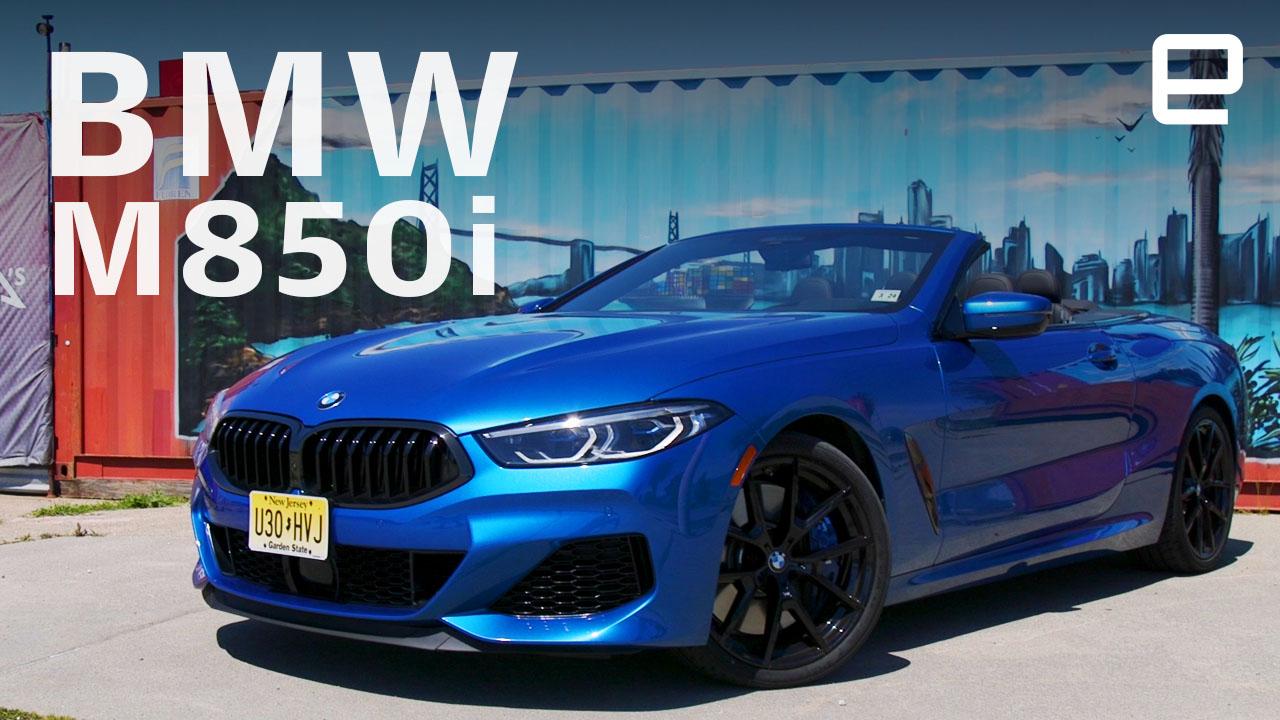 Road trips are wonderful. But while cruising along in a beat up Civic or Bug made for great stories in your 20s, as you get older you want a little more comfort. You also want some power and the latest tech. And you know what, let’s throw in the wind rustling through your hair. Turns out you get picky as you age. Don’t fret older human, BMW’s got your back.

The 2019 BMW M850i convertible (starting at $121,400) delivers all the above and more. The rebirth of the 8 Series has yielded a vehicle that’s equal parts growling beast and refined tourer. Sure you could get the coupe version (starting at $10,000 less than the drop-top), but where’s the fun in that? Plus, for the rich nerds out there, it’s packed to the kidney grilles with the latest tech from the German automaker. I just wish it looked the part of a cutting edge vehicle.

For the tourer in a hurry, the M850i has a 4.4-liter twin turbo V8 engine pumping out 523 horsepower and 553-foot-pounds of torque. It’ll do zero to 60 in 3.8 seconds. Even in Eco mode, when the pedal is pushed to the luxurious metal, it unleashes a guttural growl (albeit a refined one). Just enough to let you and others on the road know that you’re the type of 40-something that still has a pulse. In Sport Plus mode, the soundtrack includes the pops and roars found in sports cars.

Getting all that power to the ground in an orderly fashion is where BMW’s XDrive AWD (All wheel drive) system shines. Stomp on the accelerator and the system reacts by making sure you’re getting the most grip possible.

That grip is impressive when you think about the fact that a few months ago I had a chance to drive the M850i on a track in Palm Springs during a downpour. I got up to 125 miles per hour on a rain-drenched track and the car felt like it wasn’t even close to losing its connection to the road. If that’s not some impressive tech, I don’t know what is.

That grip is supplemented by the car’s all-wheel steering system making the vehicle more nimble than something that size should be. The rear wheels turn up to 2.5 degrees in either direction and around corners, it’s weird. There’s no other way to describe it. It’s almost like oversteer but in an odd, smooth way. The back end just sort of glides into position during switchbacks and to be honest it takes about an hour to really get used to it. But once you’ve mastered it, it creates this wholly new cornering experience that I enjoyed.

The all-wheel steering is fun on the open road, but it’s better in parking lots and other tight driving situations. Having those rear-wheels turn helps make getting into weird spaces much easier while garages with all their poles and randomly placed support beams become about 100 percent more manageable.

Those parking situations get an additional bit of the tech with the Backup assistant. The M850i can retrace the last 55 yards it drove. But in reverse. For example, let’s say you had to drive around a pole to squeeze into a spot. When you return to your car, just put it into reverse and press the Backup Assist button on the infotainment display. You’re in charge of handling the braking, but the BMW will back out of the spot and around that pole along the same route you used to get in. It’s slick and I can’t wait until it seeps into cars that regular folks can afford.

BMW’s engineers also took on another frustrating aspect of driving: traffic. Adaptive Cruise control and Lane-keep assist have become the norm in most cars above $30,000. While BMW’s system is one of the best on the market at navigating and centering within lanes, the automaker has a new feature that offers hands-off driving. The Extended Traffic Jam system steers the car for you in traffic at speeds up to 40 miles per hour. It’s a bit like Cadillac’s Super Cruise system. And like the system from GM, it’s able to steer the BMW because it watches you to make sure you’re paying attention to the road — even if you’re not using your hands. A camera is situated directly above the gauge cluster and if it senses that you’re not looking at the road it sounds an alert and reminds you to watch the road.

To let you know it’s working, two LED strips in the wheel glow green when you’re all good. I’ve become a fan of these driver-monitoring systems. Far too many people behind the wheel are reaching for, or just staring at their smartphones instead of paying attention. That puts other drivers, pedestrians, bicyclists, and really anyone within a few feet of a road in danger. If you’re not going to pay attention to the road because it’s the law (and common sense), maybe you’re car should be shaming you.

Another piece of tech meant to help you keep your eye on the road is BMW’s voice assistant. Imagine Siri or Alexa but for your car. The “Hey BMW” wake word lets you ask for directions, check the weather, adjust the temperature, change the radio station and a whole host of other features. I used it both with the top up and down and in both cases, it did a fine job understanding my random queries most of the time. It’s not as robust as Mercedes’ MBUX, but it works for most things you actually need in a car.

That’s housed within the automaker’s iDrive infotainment system. The M850i has a 10.25-inch touchscreen along with a control “puck” that sits in the center console. The round controller is helpful about 75 percent of the time, but some features (like swiping between home screens) is easier with the touchscreen. For the Engadget reader, BMW supports CarPlay, but it’ll cost you, which is always a disappointment since it’s standard on so many other vehicles.

The system itself is a series of customizable home screens where a driver sets up their top-level features of choice. BMW has done a better job surfacing the options most people use all the time, but you still end up diving deep into submenus to make changes to features. My suggestion is to take care of these choices before you hit the road.

The rest of the interior is pretty much like every other BMW. Everything is where you expect it to be and I applaud the company for adding all the driver’s assistance controls directly to the steering wheel. With your left thumb, you can switch between just having adaptive cruise control, adding lane keep assist to the mix or going all in with Extended Traffic Jam if the situation is appropriate.

For longer jaunts, the front seats in the M850i are comfortable and are electronically adjustable. It’s what you would expect from a car meant to be taken on road trips. A nice touch is the vents in the seats that pipe hot air onto your neck and shoulders. A clever feature that keeps you warm during top-down driving. The back seats, on the other hand, are nearly worthless. No adult-sized human fits back there if there’s an adult-sized human sitting in front of them. I took my friend and his two kids for a ride in the car and the child behind me had to sit with her knees at her chest. I wish BMW had just decided to rip out the seats and add storage space as they did in the i8 Roadster.

What is surprising is the amount of actual cargo space you get. The trunk loses precious volume because it’s where the top is stored, but it’s deeper than expected and those nearly worthless backseats fold down so you could stick a small snowboard back there if you wanted. The weird thing is that the trunk lid is automated. It’s not a huge SUV door, it’s a tiny little thing and making it open and close by itself just seems a bit like overkill.

You can add the crystal gear shifter to that list of things that seem weird. It works in Volvos but here in the BMW, it adds a bit of gaudiness.

Where the automaker doesn’t go overboard is with the exterior styling, and that’s where I’m most disappointed. The M850i should be a head-turner but it feels like it’s missing something. The back end looks sort of cool, but the profile and front end are immediately forgettable. Maybe take some of the pizzaz that went into the decision of the crystal shift knob, tone it down a bit and give the car more character.

It’s not an ugly car. Far from it. It’s just well… there.

Yet when you put all the elements of the car together, you come up with a fun tourer that’s equal parts tech, speed, fun, and comfort. BMW’s decision to make a convertible version of the M850i coupe should be applauded because it takes a great tourer and transforms it into something special. Road trips are where memories are made. Road trips with the top down, those are pure magic.