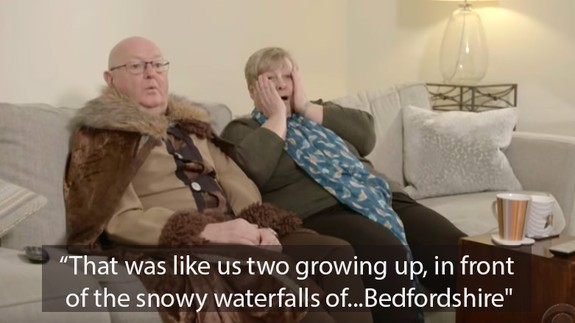 You might not know Malcolm and Margaret Corden — AKA James Corden’s mum and dad — personally, but after you’ve watched this video, you’ll wish you did.

James’ parents, who live in High Wycombe in the UK, were tasked with watching the first episode of the new series of Game of Thrones. Having never seen a single episode, the pair haven’t the foggiest idea what’s going on. And witnessing their reactions is nothing short of hilarious.

Firstly, Margaret is confused at the mention of Sansa, and thinks they’re referring to Santa. Then, Malcolm offers up his thoughts on Daenerys and Jon Snow getting loved up in front of a waterfall.  Read more…